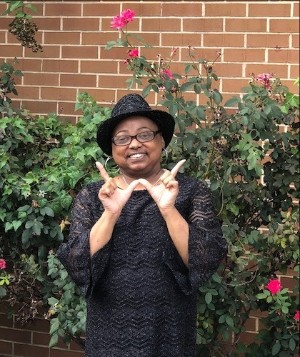 Dorothy Webb, Workshops, Inc.’s bookkeeper, is our fashion role model. From beautifully matched dresses, shoes, and hats to silly celebrations like wearing a red white and blue headband with wiggling stars attached on the 4th of July, we always look forward to seeing what Dorothy is wearing!

She is also a role model for Peter Watts, our security guard. On July 4th, 1988, Dorothy had a kidney transplant. She was in her early 20s, a college student, enjoying her life, when she discovered she had to first have dialysis, then a transplant. Thirty years later, she is healthy and energetic, and only has to see her kidney specialist once a year. Peter’s kidney transplant was more than 25 years later, so Dorothy is his go-to for advice about the ins-and-outs of being a transplant recipient.

Dorothy came to Workshops on March 26, 1990 (did we mention she has an incredible memory?), when she wanted to get into the workforce after recovering from her transplant. She started by making labels for our mailing department, then gradually moved up to assisting in the Executive Director’s office, then doing payroll, and finally after finishing her Accounting degree at UAB, she became Workshops’ bookkeeper.

She also met the love of her life at Workshops. A month after she started, Workshops hired David Webb to be our security guard. He immediately took to Dorothy. She took some convincing… almost 20 years of convincing! He would buy her gifts, hang around her desk, and do anything he could to get her to go out with him. Finally, in 2005 she agreed to a date. It took another four years for them to marry, and their married life was full of fun and adventure. They loved to travel, including going to New York and to the Grand Canyon. They had a great life!

Sadly, just two years after they married, in 2011, David died of cancer.

Dorothy is not one to dwell on the past or sadness. Instead, she enjoys her friends, her job, and living with her nephew, Tony, who is 34 and uses a wheelchair full-time due to cerebral palsy. She loves watching monster movies, like Sharknado, Jurassic Park, the Halloween series and Friday the 13th.

And we REALLY love Dorothy. 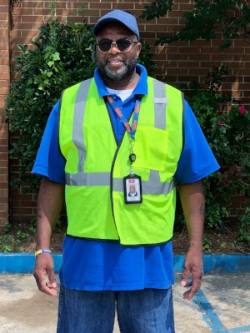 Peter has the title of “Security” at Workshops, but is so much more. He is the smiling face that greets staff, production workers, delivery folks, and visitors when they come to Workshops in the mornings and late afternoons. His melodious voice on the PA system lets people know when their ride is waiting, if they have a phone call, or any other general announcements. His voice makes a fire drill sound like an invitation to a gala. Every delivery person, mail person, bus driver, and Workshops neighbor knows Peter and makes a point of waving and calling out to him when they go by.

And, yes, he does provide security for us – monitoring our security cameras, watching to make sure we get to our cars safely in the afternoon, and securing the building and parking lot every evening

Originally from Selma, Peter has been at Workshops since 2004. He came to us through the Department of Vocational Rehabilitation. He started working in what was then our mailing room, then became a materials handler. Peter eventually was Workshops’ truck driver, and finally in 2010 he took on his current position of Front Desk/Security.

During his time at Workshops, he faced numerous health issues including undergoing dialysis and eventually a kidney transplant at UAB in 2011. You would never guess he had ever had a health issue to see him patrolling Workshops in the afternoon.

He has two grown sons and a daughter who is a rising senior at the Jefferson County International Baccalaureate School. In his spare time he like to exercise – especially walking – and follows the Miami Heat and the Pittsburgh Steelers. We are lucky to have him as part of Workshops! Be sure to say hi the next time you come to Workshops.

Susan first came to Workshops, Inc. to go to school. When she finished high school, she stayed. And we are so glad! Very quickly her supervisors saw that she is meticulous, detail-oriented, and learns and masters tasks quickly. Current Director of Operations Kathy Dunn loves having Susan as part of her team because she can move easily from one detail-oriented task to another with a minimum of instruction or supervision.

Susan's dedication is legendary! Earlier in her time here, she rode a special bus to and from work. If the bus to take her home was early, she would refuse to stop working, saying she had to finish her shift and would have to find an alternative ride. She also takes great pride in the trust Kathy puts in her. Susan says with a smile and a gleam in her eye, "I keep learning how to work. Kathy says I can do the work better than her!"

But Workshops is just part of Susan's busy life. She never lets her disabilities keep her from fun! Each summer, she spends a week at camp and makes sure she tells everyone when she is going and shares stories and pictures when she comes back to work. But the greatest passion in her life, outside of her work and her family, is square dancing with the Birmingham Square Dance Association. She loves to tell stories of her square dancing fun, including tales of her Uncle Ronny who is a caller for the group and loves to play tricks on her during dances. Come visit us at Workshops, Inc. and ask Susan to tell you all about it.